Music has always been my refuge. When I was a boy, my parents were members of a fire-and-brimstone religious sect that insulated us from modern society. I wasn’t allowed to play sports, celebrate Christmas or, God forbid, listen to anything as sinful as rock ‘n roll. But late at night, once the lights were off in my bedroom, I would slide a red transistor radio under the covers, power it up to a bare whisper and just escape. Elvis, Roy Orbison and The Beatles mesmerized me, and kept me sane. And so began a life-long love affair with music.

Years later, I bought a guitar and a piano and taught myself to play. I’ve been writing songs ever since, and now have 10 official (BMI) credits to my name. I even ran my own record company in the 1990s and was nominated for a Grammy in 2008 for Executive Producing Eric Benet’s R&B album, “Love and Life.”

The song I’m proudest of, though, is “Heart of America.” It became a call to action and the anthem for the rebuilding of the Gulf after Hurricane Katrina. With selfless help from singers Eric Benet, Michael McDonald
and Wynonna Judd, “Heart of America” raised $127 million for Katrina-related charities. Not bad for a song that came to me one night in my sleep. 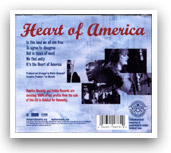